6 Advantages of Choosing Flutter for Your Next App Development Project 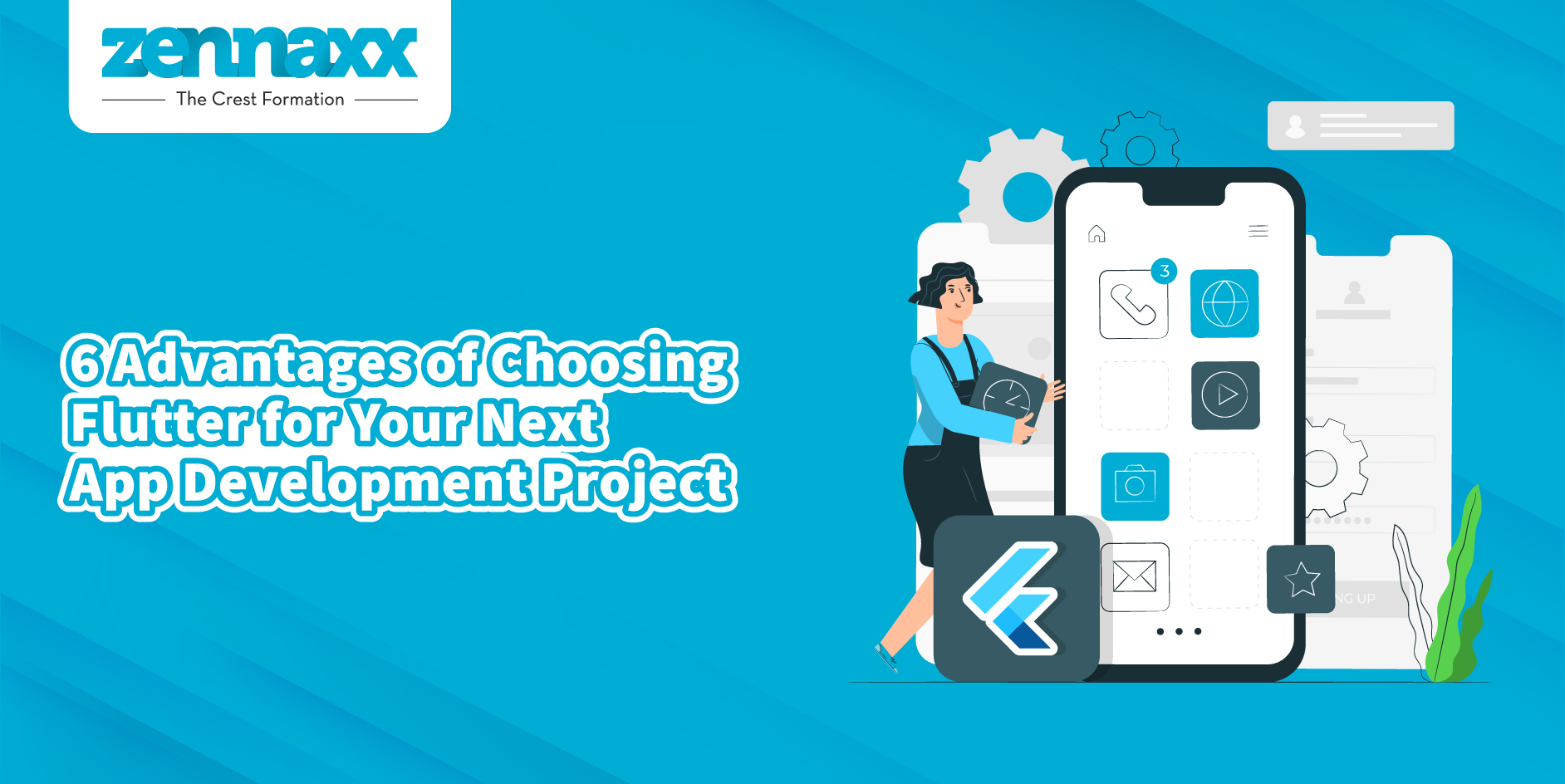 Google came up with Flutter as a UI software development kit used as a mobile development framework. It is gaining widespread popularity among developers worldwide. It combines features from cross-platform and native development approaches to enable the rapid creation of strong apps.

Numerous organisations seek to engage a Flutter application development firm to create applications that cater to a large audience base.

All of this is accomplished with the use of a single code base. Thus, we can say that Flutter is a framework for developers that allows them to write once and execute anywhere.

What are the Advantages of Choosing Flutter App Development?

This blog discusses 6 top advantages of choosing Flutter App Development, but the key advantage is that it is a cross-platform framework capable of performing certain tasks. And this includes certain characteristics that are necessary for the project but extends to usability. Flutter is distinct from its competitors in several crucial ways.

Let's examine what makes Flutter app development superior to others based on the advantages it offers.

Our experience takes at least 40 seconds to construct a typical mid-size Android app and ship it to the test device. And occasionally, it can take an eternity to modify a minor cosmetic feature of the layout.

Some of you may object, stating, 'Wait a minute, Android Studio already includes a layout preview for that.' Indeed, it does. However, there is a caveat: the feature is constrained and may not always function as expected, particularly with custom views.

Additionally, the Flutter team has made a concerted effort to provide a diverse set of ready-to-use widgets. Most of them are extremely customisable, saving you time in ways that no other framework does. Along with various basic layout widgets, Flutter has a sizable collection of Material and Cupertino widgets that faithfully emulate the functionality of each design aesthetic.

also factor in the large standard library, waste collection, robust typing, generics and other key characteristics of Dart. Dart is like Java and incorporates many other popular language features. Its reactive programming methodology facilitates the completion of developers' typical duties.

Since it is built for client development with HOT RELOAD and is powered by the DART VM, developers can make changes iteratively and immediately see the effects of their differences in the app.

The adaptable compiler technology enables you to run Dart code in a variety of ways, depending on the target platform and objectives:

One of the most compelling features of Flutter is the ability to modify every element on the screen, regardless of its complexity. While it is often feasible to create a highly customised UI on native platforms, the work required varies by order of magnitude.

Another advantage of using Flutter for your next project is that it increases the process's flexibility and adaptability without increasing the burden. Flutter enables you to execute shared element changes, shadow, color, and shape with customised manipulation that includes clipping and other transformations.

The Minimum Viable Product encapsulates an application's essential operations and features. A Flutter-based MVP is cross-platform compatible and delivers a superior user experience. This attracts many investors and provides them with the opportunity to finance your business.

Flutter app developers use Flutter's adaptable user interface, ease of integration, speed, and performance to create high-quality MVPs that appeal to investors and consumers. As stated before, Flutter's SDK supports both Cupertino and Material Design, which gives the app a near-finished look and works nicely on both iOS and Android.

Additionally, Flutter app developers may modify widgets to meet their unique needs. Flutter offers accessible widgets and enables developers to change them according to their needs. Dart is required for Flutter app development. Dart is an object-oriented scripting language that is excellent for developing high-quality real-time applications.

Also Read: Flutter For MVP Development: Why Startups should opt for it?

Flutter includes a plethora of widgets to assist developers during the creation process. It significantly simplifies and accelerates the process of creating a basic user interface. Develop a UI element once, and it will automatically adapt to different resolutions, displays, and systems. Additionally, you can wrap one widget inside another to provide multiple functions.

#6. Customised Logic Implementation Depending on Platform

Apart from the user interface, many real-world mobile apps depend on sophisticated OS-level capabilities such as GPS coordinate retrieval, Bluetooth connection, sensor data collection, permission handling, and credential management. Many of these are accessible when building a Flutter application through a Google-supported ready-to-use plugin.

Flutter app development makes it simple to communicate between platform-native code and Dart through platform interfaces. In this manner, you can implement every feature that a native app can perform on a Flutter app with little additional work on the native side.

These factors combine to make Flutter an ideal choice for businesses wanting to avoid hurdles associated with locating professionals, adapting to new technologies, and integrating the tool into the system. Compared to other cross-platform methods available, Flutter provides the fewest risks to an organisation and so deserves to be the first choice for yours. If you are thinking of starting with the Flutter app development, it is recommended to hire a dedicated development team for the same.

Start with Flutter as it is rapidly gaining popularity because of its numerous advantages. You may read about it in detail in the post. It will assist you in making an informed decision and selecting this technology to develop a new application.