Flutter vs React: Which one should you choose for app development? 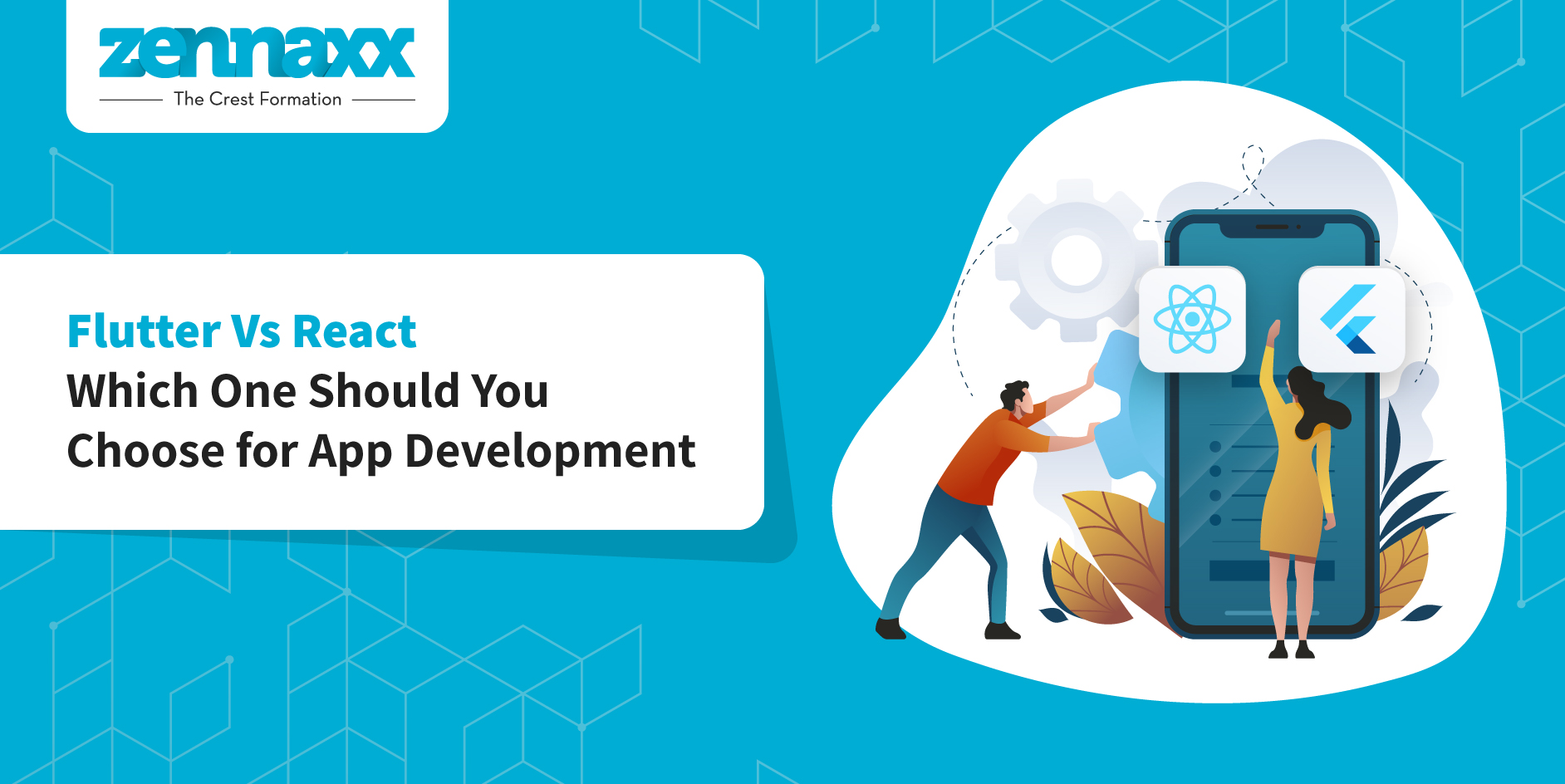 You will not need data to see that mobile app use continues to grow. However, for the sake of believability, consider that smartphone users in the United States spend around four hours each day on applications in 2020. This amount of time is more than the typical American spends watching live television.

Profiting from the mobile industry today will be a prudent and, simply, financially advantageous move. However, you will want the appropriate software to get started. Flutter or React Native may be the answer. Regardless of sector, every firm desires to develop a simple mobile application to provide a complete and tailored solution to each consumer. Unfortunately, developing native applications for Android and iOS is a lengthy and costly process. Thus, the notion of cross-platform programming has gained traction, and the community's favourite term is becoming Flutter vs. React Native, and which is better?

Things to Consider and Key Benefits of Flutter App Development

Cross-platform applications are more efficient to build since they allow for the reuse of code across various systems. However, multiple frameworks provide unique capabilities and benefits for cross-platform development efficiency.

After almost two years of gaining on React Native, Flutter became the most searched term worldwide in April 2020 and remains so throughout 2021.

Google Trends is a measure that indicates the frequency with which a certain query is put into the search engine in comparison to the general search volume for a specified period. That is, it estimates a request as a proportion of all Google search queries.

From the below-mentioned image, it is visible that Flutter is twice as popular as React

Native. The average amount of "Flutter" questions scored is 86, compared to 58 for React Native. We can also use Google Trends to determine the popularity of additional hybrid frameworks compared to the two outlined. 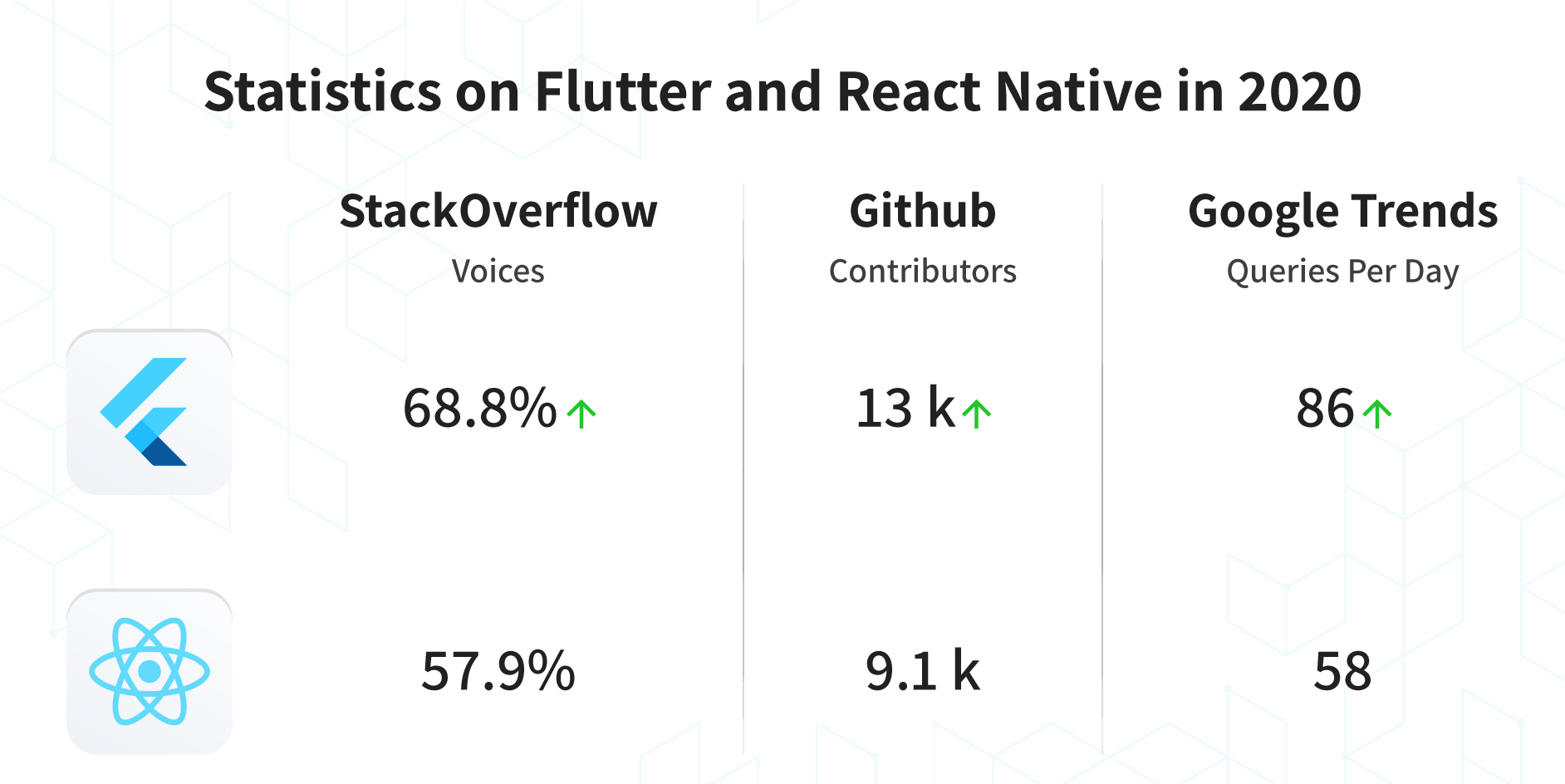 According to Google Trends, StackOverflow, and GitHub, a framework is listed in the following order based on popularity:

Statistically, the best hybrid app framework in 2020 will be Flutter, while the runner-up will be React Native. It's interesting to note that the complete picture becomes clear if we look at the image across five years rather than one year. Flutter's popularity has exploded in the previous three years. While React Native and Cordova remained popular, interest in Xamarin has dwindled.

A recent study from Statista seems to back up this assertion about the worldwide popularity of Flutter overreact Native. Nearly 20,000 people took part in the survey, and the results showed that in 2020, Flutter and React Native will go head-to-head.

Additionally, Flutter has a command-line interface (CLI) that comes pre-configured with utilities such as Flutter Doctor, which assists you in setting up your preferred IDE and iOS or Android programming. Flutter Doctor searches for and validates the settings of tools installed just on the local PC. In conjunction with Flutter Doctor, Flutter CLI significantly simplifies the process of setting up an ecosystem for a new Flutter mobile application.

With the Expo client, you can examine your applications as they are being developed straight on your mobile device (no need to go through Android Studio or XCode). Expo CLI simplifies creating new React Native applications by offering tools for development, debugging, logging, deployment, iteration, and compilation.

Know Why Choose Flutter App Development for your next app idea?

The design of React Native necessitates the creation of a bridge that allows the interaction between JavaScript and native user interface components, as well as device-specific features (Bluetooth, sensors, camera, etc.). React Native is somewhat slower than Flutter due to the bridge-based communication.

Flutter is not dependent on a bridge. Rather, when the user interacts with the app, Flutter's main visual engine, Skia, transforms the UI to native code.

• IDEs. When picking a development platform, it is critical to choose one that is comfortable for you. In the instance of Flutter, this option is limited due to the technology's infancy. It is supported by Visual Studio Code, IntelliJ, and Android Studio. Whereas with React Native, you can use almost any IDE.

• Documentation. This is another distinction between Flutter and React Native that wannabe programmers sometimes argue over. Flutter comes with more documentation than React Native. It enables young developers to get acquainted with the technology. However, this would not work on React Native. Its documentation is primarily concerned with discussing complex procedures and assumes that anybody reading it is already knowledgeable with JavaScript.

• Deployment. Flutter triumphs once again. It has an incredibly simple approach for publishing a program to the App Store or Google Play. This may be accomplished entirely using the command line (assuming other customization options are not required). However, even for them, a plethora of third-party tools are accessible. Whereas with React Native, an application may be deployed exclusively via the use of third-party technologies. Additionally, finding a tutorial on how to accomplish it may be not easy.

Flutter's graphics engine renders and manages its collection of custom widgets. It is pre-configured to support Material Design. It is time-saving. Flutter enables developers to generate most views using pre-built widgets that are readily adaptable and cross-platform consistent.

React Native ships with just the most basic platform-agnostic components, such as a button, slider, or loading indicator. As previously stated, React Native supports many third-party components. They may be used in a project by a developer, but this needs more work and time.

The ecosystem of React Native is enormous, far larger than that of Flutter. This is mostly due to the node package manager (npm), a package repository. As of April 2020, npm hosts approximately 1.3 million packages. Npm has existed for eons. And, although it is primarily targeted toward web development (it being the domain of JavaScript), many libraries may be simply modified for use in React Native applications. However, there is a drawback to using npm - many of the accessible JavaScript libraries are of poor quality and are unusable in production, so you must exercise caution when selecting libraries for your application.

The pub-dev repository for Flutter/Dart is a continuously expanding repository, although it is still in its infancy and lacks many ready-made solutions. However, a quick check on Github indicates that the communities of both technologies are comparable in size.

React Native enables developers to create React-based applications for iOS, Android, and the web. Microsoft just announced a fantastic initiative in which desktop applications may be formed in React Native (for both macOS and Windows).

Hot reload is an extremely helpful feature for developers that enables them to quickly reload the app and inspect changes to the user interface. Fast Refresh is React Native's equivalent to Flutter's Hot Reload.

The disadvantage of either approach is that sophisticated code modifications (e.g., switching from a stateless to a stateful widget) cannot be hot reloaded. Complex changes need recompilation of the application.

Flutter and React Native are comparable in many ways. Both technologies provide unique capabilities like real-time updating and creating visual user interfaces using adaptive software. These related characteristics exacerbate the difficulty of any competition.

Flutter consistently outperforms React Native in practically every side-by-side comparison. However, nobody will fault you for wanting to use the React Native framework's benefits if you are opting for an outsourcing mobile app development company.

Considering the reasons above, Flutter holds a commanding lead in the past mobile app development competition. It has all the necessary tools for quickly developing appealing mobile applications and assisting companies.

Both React Native and Flutter are superior to the hybrid frameworks with which they compete. While the final choice is ultimately yours, we'll state that Flutter is more current and efficient at times than React Native. Consider the lack of a JavaScript connection. It raises the bar for progress. Additionally, Google offers continuous support and upgrades to ensure that no unforeseen errors occur.

Know Why Startups should opt for Flutter For MVP Development?