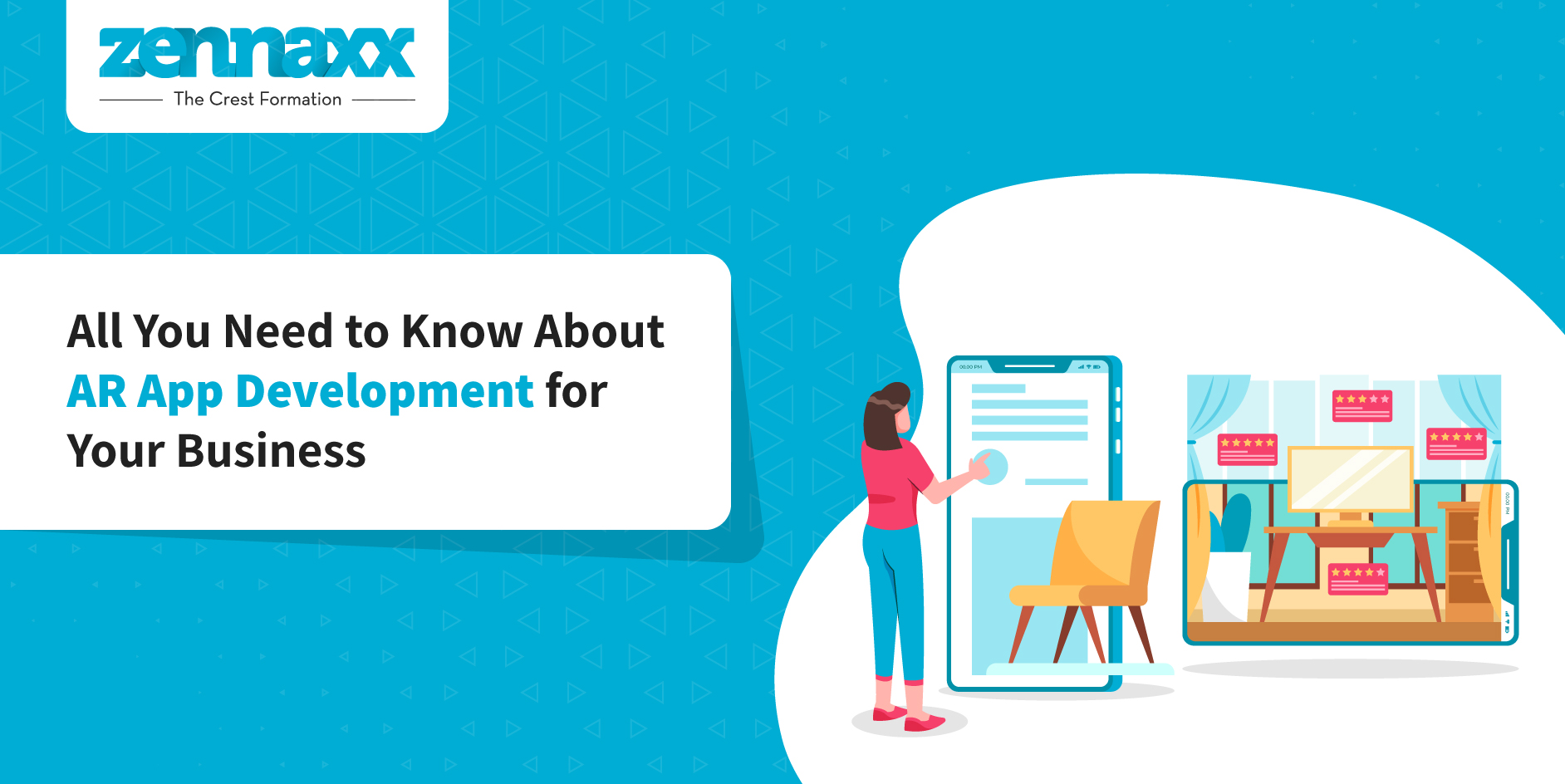 Despite last year's numerous and ongoing hurdles, augmented reality's success continues to surge with the bright future ahead. With an expected market value of $88.4 billion, Augmented Reality (AR) is a critical industry to get into if you want to be on top of the game in technology. The potential engagement that AR features and products may capture cannot be overstated, with an audience of 810 million active AR users on mobile. Now, let's understand the meaning of augmented reality.

In its most basic form, augmented reality allows app developers and companies to overlay digital data on top of real-world items. Although it is no longer in its infancy (with its close relative, virtual reality), augmented reality (AR) is already creating ripples in the mobile app technology environment. It's here to stay as a disruptive force in industries ranging from finance and retail to travel and fashion.

Augmented reality is primarily seen as a continuation of existing technology, which is advantageous in consumer acceptance because anybody can use it with a smartphone camera. So, what exactly is augmented reality, and how does it work?

You will find two types of AR apps: location-based and market-based. Location-based augmented reality apps use the unique capabilities of mobile devices to track each device's location. This allows AR software to give contextual info based on the site of a certain device. AR allows for location-sensitive functionality in real-world applications. Consider getting directions, finding a car in a crowded parking lot, or deciphering constellation patterns in the night sky.

In some aspects, marker-based AR apps vary from location-based AR apps. They work by allowing the software to locate specific patterns like QR code or a brand sign using the device's camera and then overlaying digital information over the real-world surroundings. This implies that when a smartphone user aims their instrument at a certain object or setting, a virtual UI appears on top of the thing. Second, the digital overlay rests on top of the recognized pattern, whether the image in question is animation or 3D. Software development managers and marketers looking to expand their present mobile app offering should look at these upcoming technologies.

How to develop an AR app for your business?

If you're thinking about making an augmented reality app for your business, there are a few things to think about. Augmented reality app development companies superimpose 3D visuals or text over real-time photos being processed by the user's smartphone. So, you'll need to know how to process images. This will enable you to create an app that can monitor markers or natural elements in the actual world.

When employing computer software to create photographs, the visuals must appear realistic and trustworthy. It's also crucial that the images align with the surroundings. From a development standpoint, getting both of these things right may be incredibly difficult. However, failing to create a simple UI/UX will result in a difficult-to-use program that offers little value to the end-user.

Given the growing popularity of AR, it's critical to remember that many customers will anticipate a consistent UI/UX in the future. In a constantly increasing industry, making your software easy and intuitive can greatly boost your chances of success.

However, creating AR apps entails more than simple analysis and processing. Your team will require more specific mobile app development expertise and developers who have a thorough grasp of the process.

Developers of AR apps often have a diverse set of talents, including 3D modelling, computer vision, and image knowledge, as well as a thorough understanding of current mobile technology. You'll require an experienced development team with a complete grasp of 3D modelling from an image standpoint. C# and C++ are famous programming languages for augmented reality app development. Both provide a simple entry point for developers who already have these abilities.

However, creating augmented reality apps takes far more than knowledge of smartphone programming and 3D imagery. To get started, you'll need a logical perspective. If you're a company aiming to create the next big app, you need to be enthusiastic about innovation and the pursuit of new technology. Passion, on the other hand, is inadequate! Success with AR, like any other mobile app development project, begins with the end in mind. Because developing these applications may yield big benefits, you must think about your objectives and how you'll attain success.

Points that you must consider while developing the AR app for your business.

The first differentiating feature of AR software development is its price. Free, open-source AR software development kits, which are open to contributions and may be upgraded with new features offered by developers, are the ideal alternatives for individuals who wish to experience AR development for the first time. You must hire a dedicated app developer to build an AR app for your business.

Paid SDKs usually have many price levels to choose from, depending on the user's requirements. Free tiers offer limited capabilities and are intended to serve as a "demo version" of the entire product. A commercial license will be necessary if you want to build a complicated app with a lot of dynamic content. As a result, you will have to pay.

If you're making an app for iOS or Android, picking an augmented reality toolkit won't be difficult because practically all of them support it. Meanwhile, the number of tools compatible with Windows or Mac OS is limited. You may still use an augmented reality development kit to create a Windows PC or smartphone program that supports the universal windows platform.

This is a must-have feature for any AR software since it helps users recognize items, places, and photos. Smartphones and other gadgets achieve this by tracking pictures using machine vision, camera, and artificial intelligence software, which may then be overlaid with animations, sound, HTML content, and so on.

The most important element of any AR app development is 3D picture identification and tracking. An app can "understand" and enhance the enormous spaces around the user within major structures such as airports, bus stations, retail malls, and so on, thanks to the tracking. Support applications can recognize 3D items such as boxes, cups, cylinders, and toys.

When designing AR mobile applications, you must determine whether user data will be saved locally or in the cloud. This option is primarily influenced by the number of markers you intend to make. If you want to add a lot of markers to your app, you should consider storing all of the data on the cloud. Otherwise, your app will take up a lot of space on the device. Furthermore, knowing how many markers your app utilizes is important because some augmented reality software development kits only support a few hundred while others support thousands.

However, storing markers locally on-device will allow users to operate your augmented reality software offline, which might be useful if you don't always have Wi-Fi or mobile data access.

If you're planning to make a location-based AR app, geolocation is a must-have feature that the AR tool you're going to utilize. GPS may be used in augmented reality games such as Pokémon Go and apps that overlay data on surrounding areas.

Benefits of having the AR app for your business

AR brings together a new method of exchanging information and interacting with it, which helps businesses better handle their needs. It's a hybrid of the physical and virtual worlds, with real-world components thrown in for good measure.

It works in conjunction with computer-generated perceptual data to create immersive experiences. It can employ sound, video, graphics, and other media to convey information. It can speed up many commercial activities due to its amazing educational and marketing capabilities. It can create new opportunities for product promotion or learning new hobbies, make professionals' jobs easier, and save money.

Visualization of product and service

AR allows you to see an object in a context that is unique to you. The buyer or user may change its properties (size or color), which can be examined beneath all of its seams. The fashion industry was the first one to put this visualizing talent into effect. It allowed dealers and even end-users to connect with the benefits of the business immediately. AR can transform the real estate industry by providing the most effective way to see the property through augmented 3D models.

Another key benefit of AR applications is that they allow users to make well-informed purchasing decisions at any time and from any location. In cases when customers are self-sufficient and have no access to real-time information, augmented reality provides value to the purchasing process. It can produce interactions between a buyer and a seller on a merchant site that would not have occurred otherwise.

Users and potential buyers are constantly enthusiastic about technological advancements. A firm or brand that decides to deploy augmented reality apps retains the advantage in terms of exposure. Because it helps attract new consumers and maintain existing ones, augmented reality can become the driving factor behind the Marketing and Advertising business.

To summarise, there is ample evidence that Augmented Reality apps are revolutionizing the transmission of information across sectors and will continue to do so in the future. Your business must use a mixed reality technology like Augmented Reality. After all, it is the only technology capable of combining physical and digital reality in its purest form.