What Are the Common Challenges to Wearable Technology? 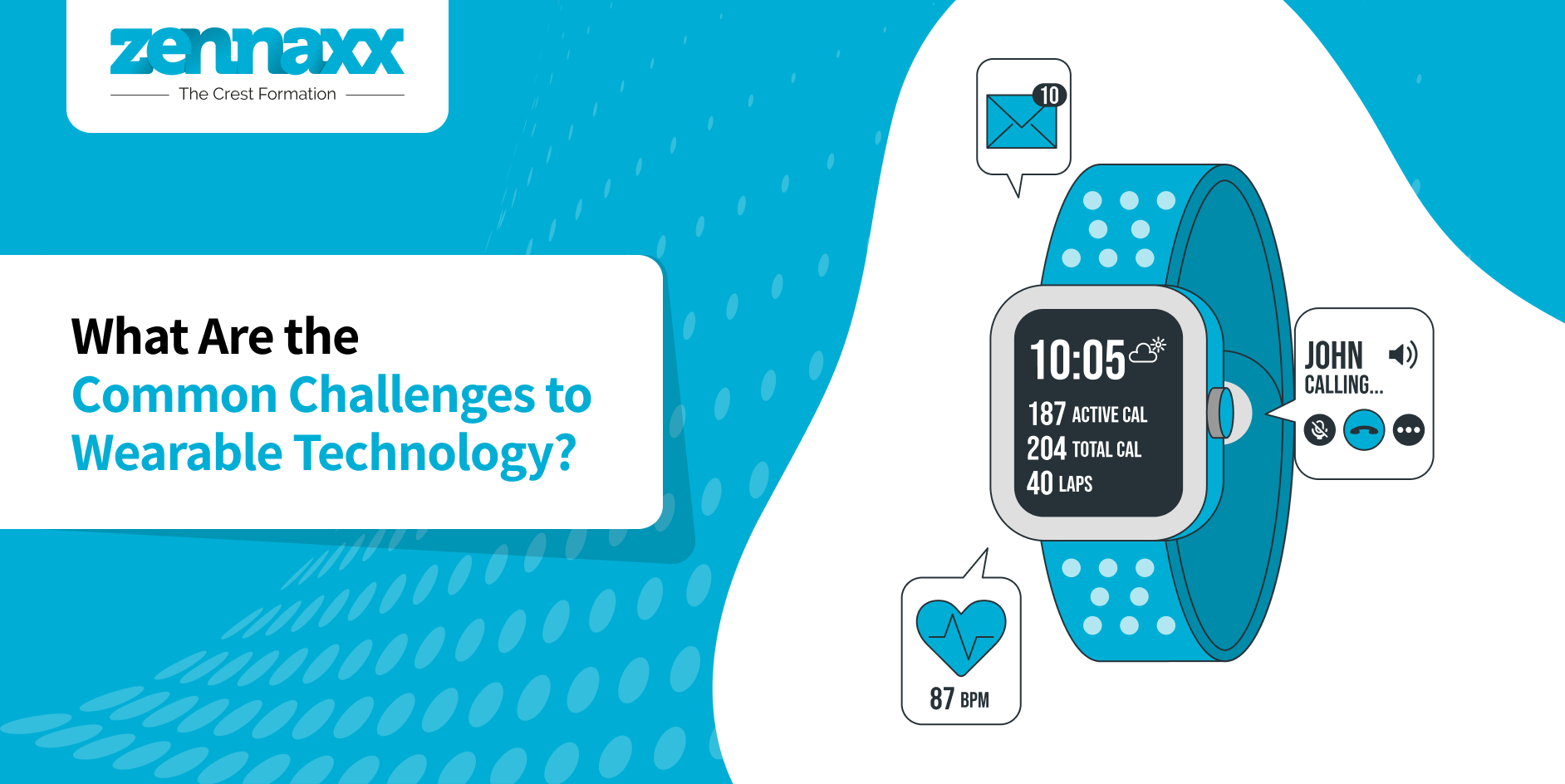 Lately, people are using wearable devices with the industry experiencing a sudden spike in popularity. This has opened up many new possibilities and opportunities for wearable app developers.

Before, there were no wearable applications at all. This technology has opened up many possibilities in the IT industry. The wearables market has only begun to take off thanks to a cutting-edge sensor and scanning feature package. Wearable technology leverages the concept of the Internet of Things (IoT) which is now used for education, health, fashion, music, gaming, travel, commuting, finance, and much more.

Modern IoT gadgets and applications have impacted many people's daily routines. Now is the time to produce relevant and up-to-date certifications in wearable applications so that people may become more aware of the newest technology developments and adopt them. Wearable app development is about decreasing human effort, streamlining everyday routines, and enhancing the user experience.

Here are some of the Statista's figures for wearable technology's global market:

Wearables have a lot to offer to people, but the developers who work on them have a lot of hurdles in enhancing their efficiency and utility.

Wearable app developers face several typical issues, and overcoming those is essential to making the most out of this technology.

Building a cross-platform application would assist app developers in accessing numerous user bases. If the app is created for certain platforms like Android or iOS, users have limited the possibilities from such a large app market. As businesses attempt to build their wearable sections by encouraging more customers to purchase wearable items, developers must stay ahead of the curve. This ensures providing an application that is accessible to download from any platform.

The battery capacity decreases according to the device's size. Moreover, the battery consumption is greater since so many functions operate in the background. To build battery-efficient solutions for wearable application development, developers must tackle this obstacle. You may also be astonished to learn that most app stores reject wearables applications with excessive power use.

Devices that can be worn on the body are called wearables. They are attached and have to depend on bigger gadgets to get the most out of the software. If their main device, such as a phone or tablet, is turned off or has a low battery, they are effectively worthless.

Bluetooth links the two devices; therefore, they must be close to one other as they lose connection if they don't see one other. To create these applications, there are limitations.

People are still wary of purchasing wearable technology because of worries about data security and privacy. To provide a better user experience, these devices now need opt-in privacy settings and transparent communication. Wearables' ability to share data has advantages, but users' trust in these devices and their private data must be bolstered with suitable security measures.

Wearable device app development is a whole new ball game. The coding standards are always changing as new devices are created. Because of this, a large number of programs are unable to run on that device. APIs must be updated to accommodate the proliferation of new platforms and devices. Due to the absence of coding standards or protocols, each API must be customized for a specific device. For long-term success, developers must master new APIs that make devices compatible.

With wearables, the barriers between devices have started to dissolve. This is a natural progression. Wearable applications should be able to run on a variety of devices. However, due to increasing fragmentation, it became more difficult to create cross-platform apps.

As a result, it is difficult to create wearable software that runs well on various devices. Third-party app development is difficult, if not impossible, for many wearable devices. For example, some manufacturers design their equipment such that the operating system cannot be changed. This means that a wearable app can only operate on a platform-independent of the manufacturer.

Read Which Are the Top Smartphone Wearable Applications?

Because wearables are so tiny, they need a lot of storage capacity. As a result, be careful to create an app that uses as little storage space as possible. Having a large number of applications running at the same time is a problem for this app's users.

Wearable device app development is incomplete without regular upgrades and revisions. In addition, the development and support teams have the ongoing task of adding new features and fixing any possible bugs. Wearable Development Agencies that give frequent upgrades for your wearable applications must be found to keep them up-to-date.

Users want mobile solutions tailored to their needs, while businesses wish for more efficient solutions. One of the most crucial indicators for establishing a wearable app's success is its performance, which can only be attained via extensive testing.

Consequently, don't even think of bypassing the quality assurance step. But have you ever thought about what might happen if a connected device with wearables suddenly stopped working? As a consequence, there will be a period of inefficiency.

Developing wearable applications is time-consuming and tedious, but it is also quite gratifying. Gaming, healthcare, banking, and other industries might benefit from the technology.

The key to success is adaptability. Platform and device evolution need developer adaptability. The developer's flexibility is a good indicator of the project's future development. A company's success depends on the steps taken to overcome hurdles throughout the wearable app development process.

Wearable apps need to be made with extra care and thought because their uses and functions are so different. As a company that focuses on app development, Zennaxx is always trying to improve its development strategies, especially for wearable devices, to keep up with how device structures change over time. Wearable devices are becoming increasingly popular, and so is the need to develop new ways to make apps that work well.

Also Read IoT and Wearables: Building Business for Future in 2022