5 Ways To Earn Money From A Mobile App 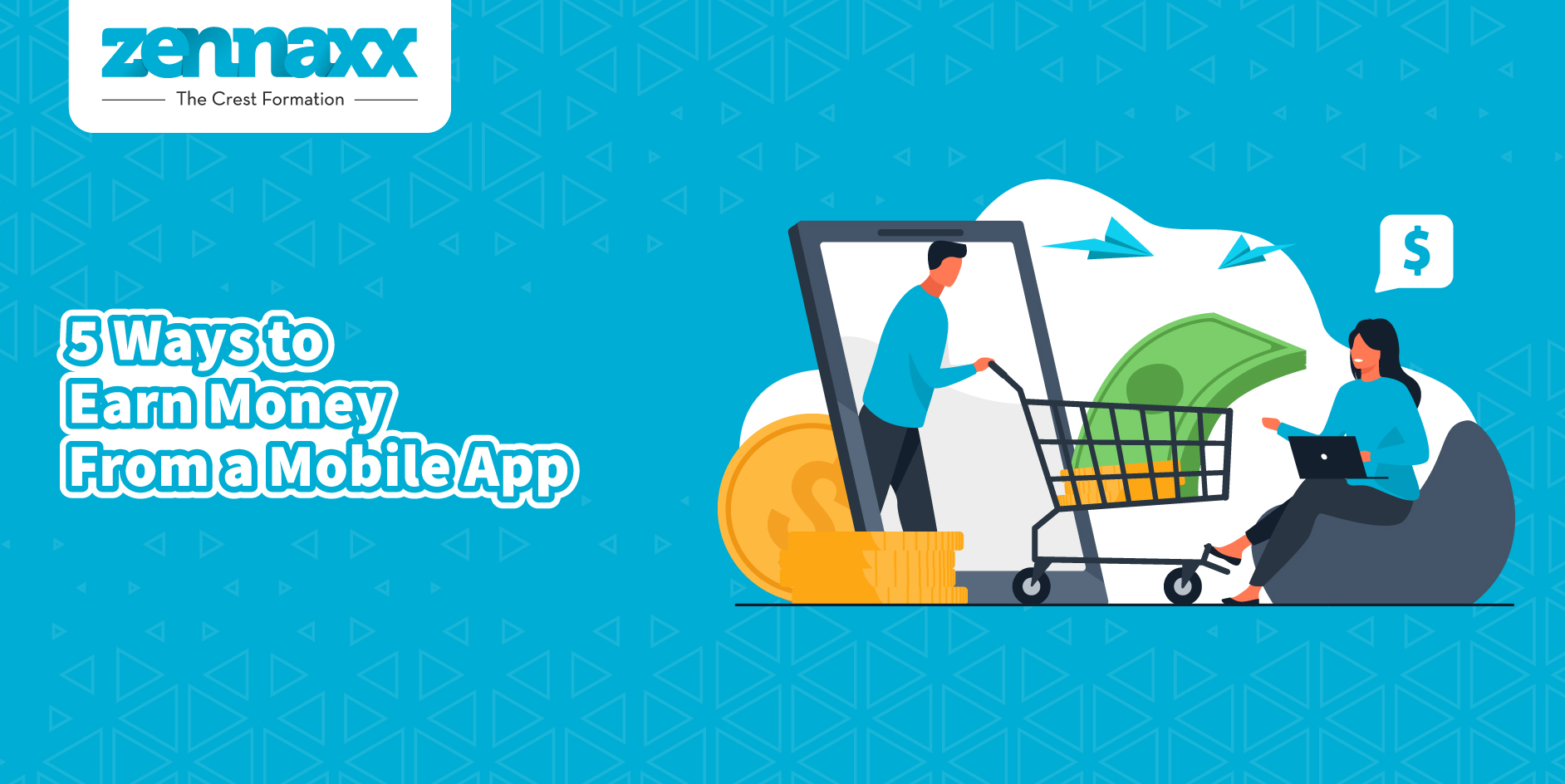 Suggesting you become an influencer to earn money would be extremely immature from our side. In this article, we will delve into the five professional ways in which you can earn from a mobile app.

Before we proceed, we would like to clarify that trying every way can be extremely helpful as you may end up coming across a fantastic startup idea.

The year 2020 has been marked as a bad year by many people in this world. A few sections of the society, however, did not. The former saw the COVID-19 pandemic as an opportunity to grow their business, which they did. Among them were various groups of mobile app developers. Some of them had experience while some of them were freshers who just wanted to try their hands in the process of app development.

Advertisers also jumped in and increased the amount spent by them to promote their brands. The amount approximately touched $240 billion in 2020.

The market is still hot, waiting to gain more attention from potential users.

With more than 2.8 million and 2.2 million apps available on Google Playstore and Apple App Store respectively, what are customers really spending their money on? Or, how are these mobile apps making money? Is there really an opportunity to earn bread and butter by developing and releasing a mobile app in the market?

Let’s find out by understanding five different ways in which a mobile app can make money.

The point here refers to encouraging the users to make an in-app purchase. The model works in one simple way. The developer releases the app in the market and offers some basic functions or features for free to all its registered users. The users can access and use the app and all the functions that are available for free. If they get hooked, then they proceed to buy more features that are available on the app.

Let’s talk about Spotify to understand this point in a better way. Spotify is a great app to create your playlist or listen to a number of songs randomly. The music app lets all its users listen to the music for free but it places a number of ads in between the songs. A user is informed that the ads can be removed by purchasing the premium package of the mobile app. Its price in the American market varies based on the plan one chooses but if the customers like the app, then they go ahead to make the payment and enjoy an ad-free experience.

Also known as the traditional form of earning money, advertisement is a great way to monetize a mobile app. In the technological world, an advertisement can be looked at in two ways namely an in-app advertisement and an affiliate advertising.

The in-app advertisement majorly includes letting a platform or an app store place ads on your mobile app. The ads are placed based on the algorithms that study what a user searches for on the internet or other apps that the user has downloaded on his or her device. Every user sees an advertisement of their interest. This is better than affiliate advertising as the algorithm automatically customizes the list of ads that must appear to a user.

Affiliate advertising as a part of mobile app development has no algorithm to assist the placement of an ad. All of it is done manually by the developer or the owner who is free to collaborate with any brand of their choice. The money comes in as a commission which is higher than what in-app advertisement offers.

It has a few limitations and yet is one of the most widely used models in the mobile app industry. The model allows the users of an app to access the content only after they have made the payment, or they have bought the subscription of the mobile app. The purchase of a subscription has a lot of great strings attached to it.

Take Amazon Prime, for example. One single purchase of the subscription grants access to a number of services to its users. The services include Amazon Prime Video and Amazon Music in addition to one-day delivery of products, huge discounts, and early access to new product launches. A similar model has also been accepted by Adobe that offers its apps related to animation, video editing, and photo editing for a monthly or yearly subscription.

The subscription model is adopted differently by different mobile apps. YouTube is available for free but it's subscription package, called YouTube Premium, gives access to all the videos without any advertisement.

Get sponsored or funded

The monetary sponsorship involves a brand investing as much money as it can. The developer, in return, commits to repaying the money along with a minimal interest rate. A lot of it happens as a goodwill gesture of the brand. The rate of return, however, makes it difficult to secure sponsorship from a brand.

The point is more of an extension of the previous point. The point of exception is that in this model, a developer himself or herself reaches out to common people and requests them to donate funds. This may be in a personal form or impersonal form.

The personal form involves a developer asking his or her family and friends to fund the mobile app till the time it starts earning money that is enough to sustain itself in the market. The impersonal form requires a developer to post the details of his or her idea on a platform like CrowdFunder and Apps Funder, to name a few, and seek funding from the users of the platform.

The users donate based on how good the mobile app is. The challenge often lies in convincing them to make generous donations. One great thing about gathering funds from such platforms is that the users leave feedback for improvement.

There are many methods to earn money using applications, but it will need some forethought and a multi-pronged marketing approach. Bear in mind that you should not abuse app monetization techniques. Your audience should not find your app difficult to use.

Keep in mind that without the finest design and development, your app will languish. If you're unsure how to develop an app and make money, you may hire us to give you a competitive advantage. Our application development team ensures that your software meets your company needs and objectives.

If your app is cluttered with advertisements and in-app purchases, customers may abandon it in favor of a comparable one. As a mobile app development company, you should understand that your app will generate revenue only if users utilize it. Your users must feel secure when interacting with your application. As a result, you must exercise caution and keep all advertisements and offers as inconspicuous as possible.

These were some of the best ways to monetize your mobile app. If you found anyone interesting, or if you have an idea to generate money from your mobile app in any other way, then go for it. If you are in the process of coming up with your mobile app then, utilize the time to finalize the model that would best work for you. Don’t hesitate to get an estimate of how much one can afford to spend on your mobile app.